"Back from the dead"

Right - this is the first club rally that I've done since the accident back in October 2009.  OK, so I've been away B&B a few times, and I've managed a couple of weekends using the "Dog Kennel", but this is the first "real" rally.  In typical style the weather forecast said "showers clearing later to give a dry but cold night".  I waited for a window in the weather, and by early evening it seemed to be clearing up so I set off.  I got as far as Wolverhampton before the rain caught me - luckily it was only for a mile or so and I soon dried out.  I looked down at my fuel gauge and noticed it was almost empty.  No problem, I'll call in at Newport and grab some petrol.  Thirty quid's worth later and I was on my way.  I rolled up at the 'Dashers just as it was getting dark.  I also noticed two of the top running lights on the dog kennel weren't working, but that can be sorted later.  Pete and Roy came and gave me a hand setting up . . . mainly putting the pegs in for the awning - due to this injury I still can't bend or kneel down.

By the time I got to the pub the band was just setting up in the marquee outside.  "Buzzard"  a rather jolly three piece band who play what they refer to as "Power Punk"  Due to the lack of comfortable seating, and the fact that I don't like loud bands, I opted to stay in the pub and create my own form of musical torture involving something banjo shaped.  I was aided and abetted by Jan and friend who happened to have a couple of guitars with 'em.

By the time I left the pub the sky had cleared and it certainly felt cold.  I never actually felt cold throughout the night, but I do recall waking up a couple of times and thinking my nose felt cold . . . .then promptly nodding off again.  According to some folk there was a frost in the morning, but me being of the idle persuasion, I didn't surface until around half past ten by which time the sun was blazing merrily.  Deciding to take advantage of the sunshine, and also having heard that tomorrow was going to be wet, I headed out on DOT and "blew a few cobwebs away". 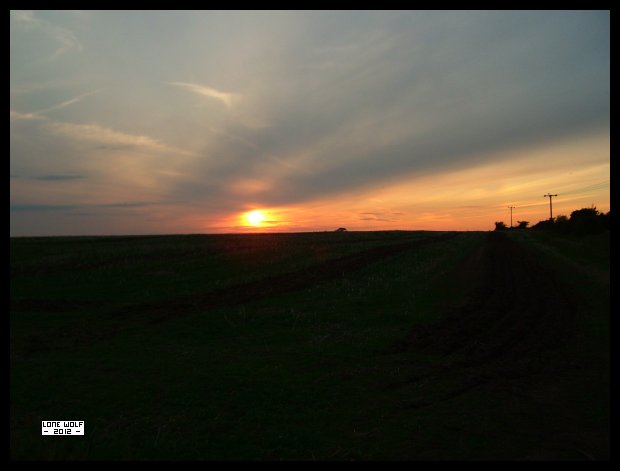 I stopped on the way back to the 'Dashers and photographed the sunset - this was the only picture I took all weekend.  I just didn't fancy trying to walk around the field taking photographs.  Having got settled back in the dog kennel, I had a quick cuppa, fitted the new bulbs in my running lights, then headed back for the pub.  I could hear this evening's band playing away - and I'm sorry to say I never knew their name - but as on Friday I gave the marquee a miss.  First thing once I got in the pub was to grab some pickles.  One of the attractions of the 'Dashers is the home made pickles, so I just had to indulge.

This evening's musical mayhem was a little quieter - I swapped the banjo for the flute and ukulele.  We only played for around an hour or so, then the rest of the night was spent drinking and talking . . . . .and implementing "Rule No 1" of the Moonshiners MCC.  Oh, you don't know what rule number one is ?  Rule number one states . . . "Always take the piss"  <-- That might help.  I decided to call it a night at a quarter to three in the morning - if nothing else, it was lot milder than Friday night.

Amazingly enough I awoke before nine in the morning, and taking heed of yesterday's weather forecast I started packing up.  The wind had picked up, and although rather grey and gloomy, the rain had not arrived.  By around quarter to ten I was set for the off.  The journey back along the A41 and the M6 didn't take long.  I struggled putting the dog kennel back into the garage, but at least I can manage that on my own now, and all being well, things should get easier.  I took DOT round the local garage and filled the tank again - this time thirty five quid's worth went in.  Looks like I paid the price for blowing those cobwebs away - 25 mpg - that's four times as much petrol as my BSA would have used . . . . . but the BSA can't tow the dog kennel.  Still, money spent on rallying is money well spent.

Thanks to Nigel and the rest of the Black Country MAG group for a splendid little rally.  I know I'm a MAG member, but I don't think I could have done much to help set things up.  I now know that I can at least start getting back on the rally scene, so let that be a warning to you . . .who knows where I might turn up next ?