Here we are again - our club rally.  Now considering that only sixty days ago I'd had a complete hip replacement, would I be fit enough to make it to our rally?   Only one way to find out, so Friday morning saw me loading the trike up and by a quarter to eleven I was on my way.  Less than two miles into the journey the rain started - not heavy rain, but just enough to make things damp and annoying.

With hindsight, I should have stopped roughly half way and stretched my leg for a while, but no, I carried on to the rally site.  Now the rally site is only thirty miles from home and it takes about an hour to get there . . .but this was the longest ride I'd attempted since my "new bits" had been fitted.  The rain, combined with the cold and the lack of a rest break took their toll.  It was a good two minutes before I could even get off the trike.  By the time I'd had a good cuss and walked around for a while things seemed better.

It seems the weather had put a few folks off.  We only had around thirty to forty people book in as opposed to the best part of seventy in previous rallies.  I spent the rest of Friday trying to get comfortable in the pub - with not much luck I'm afraid to say. 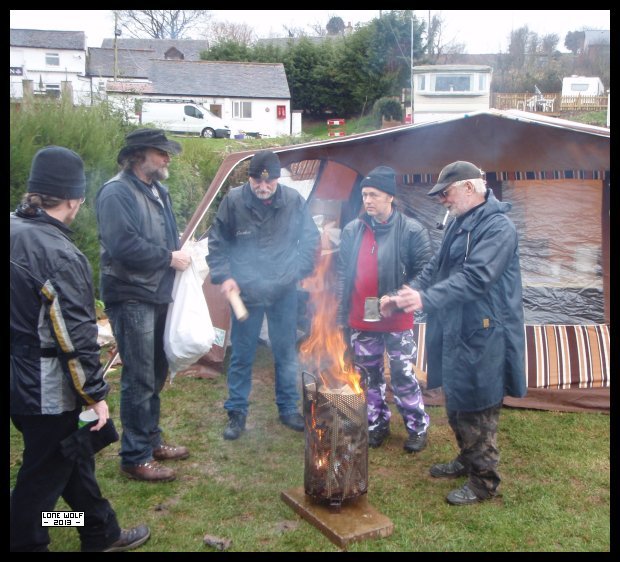 A few brave souls gather around the fire.

As per normal for our rally, most folks spend Saturday riding on the steam train into Bridgnorth and visiting the town's many pubs.  Now seeing as I can't even walk as far as the station let alone take part in a pub crawl, I headed back home to try and get a bit of a break from the pain in my leg.  I returned to the rally later on Saturday evening.

Now it seems that Anita, one of the "Toads and Dogends" club ( or "Toods" as we call 'em ) just happened to be a rally virgin.  A dastardly plan was hatched involving shaving foam.  For some strange reason several other folks, myself included, also got covered in the stuff.  Ah well, these things happen at rallies. 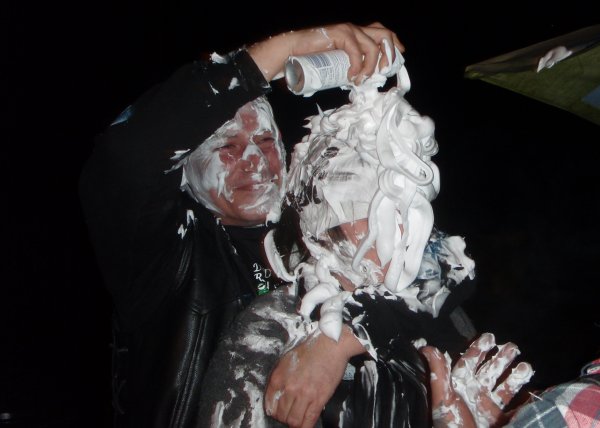 One of the Toods - foaming at the mouth, and the ears, and the eyes, and the nose.

As soon as I have the list of "who won what" I'll put it here.

Well I seem to have found some kind of list.

As I said, it's some kind of a list, but you know how organized and efficient us Moonshiners are.

So ends another "Chuffin' good rally".   Ok, so the weather could have been better, but there ain't much we can do about that - likewise the mud on the field.  As far as I'm aware everyone who came had a good time, and when all's said and done, ain't that what it's about ?

On a purely personal note, I couldn't get into the spirit of things, the constant pain in my leg just wouldn't leave me alone. . . . I only hope things get better as time goes by.