Right - here we go again - another year, another rally.  First job was to load the control tent into my van and head for the site.  That went without mishap.   Why is it that no matter how many times we put up this tent, we never seem to make an easy job of it ?   After a bit of head scratching and a lot of muttered cursing, the tent was finally up . . .good, now I can go and get my dinner. 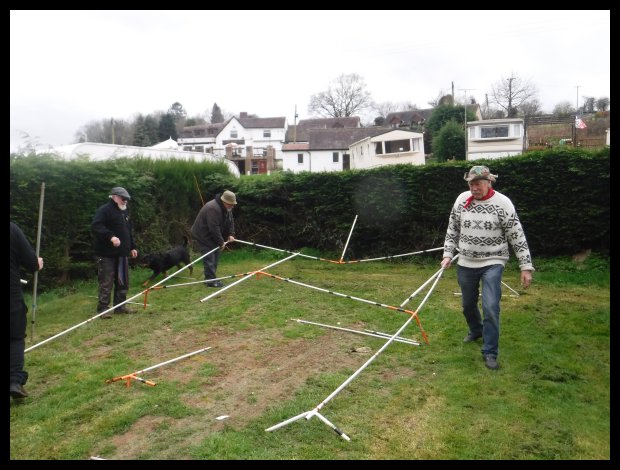 Friday evening went according to plan, with "Just Bev" keeping folks entertained in the one room, and folks talking bollocks in the other room.  Of course, some folks just stayed down at the control tent playing with the fire.

Saturday and for me it was a bit of a run-around day.  I had to be over at the Motorcycle Museum in Birmingham for the BSA Bantam Club's A.G.M.  I drove the van back home and swapped it for the Bantam - if it's the Bantam Club's meeting, I might as well turn up on one.  As it turned out, I was the only one there who had arrived by BSA - such is life.  The meeting went on for a little longer than planned, so it was late afternoon by the time I got back home.

Now seeing as I intended to go to the Wistanstow show on Sunday morning, it seemed to make sense to take a bike with me on the trailer, use that bike on Sunday, then return to the site and collect the control tent.  My BSA B31 was the chosen bike, mainly 'cos that one is a bit scabby and there was a good chance it would rain tomorrow.  It was almost dark by the time I arrived back at the rally site so I decided to take the bike off the trailer then park the van up out of the way.   As I was rolling the bike off the trailer I noticed the rear wheel seemed to have a bit of side to side movement.  I grabbed it and gave it a good wiggle - looks like the swing arm bushes have gone - ah well, nothing that I can't fix later.  Oh dear, on closer inspection it wasn't the bushes that were worn but the frame where the swing arm spindle passes through.  Not such an easy fix, but I'll worry about that later.

I decided to start the bike, that's when problem number two reared its ugly head.  The battery was shorting internally - probably due to being bounced around on way down.  Luckily Andy, who was also going to Wistanstow, volunteered to bring me a spare battery down in the morning.  So with all that taken care of, it was back into the pub for the rest of the evening.  Paul Snook was keeping folks entertained in the back room, whilst once again folks were sat around talking in the other room

Sunday morning and it was time to take down the control tent - this seemed to go a lot easier than putting the thing up.  The tent, and a few other odds and ends were loaded into my van . . . Andy had bought the spare battery, and that was bunged on the B31 . . . next stop - Wistanstow. 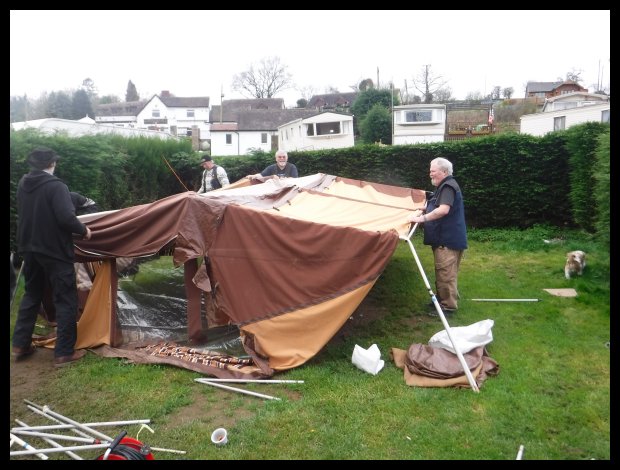 As much as I like the show at Wistanstow, it is becoming a victim of its own success with too many people and not enough space to park the bikes.  Having said that, it was still an enjoyable couple of hours.

The B31 decided that it still had one trick left up its sleeve.  I was about four miles away from the rally site when the drive chain snapped.  Maybe this was due to the swing arm being slightly out of alignment, or maybe it was because the B31 thought it would be good for a laugh.  Whatever the reason, I ended up going back to the rally site on the pillion of Andy's MZ Skorpion.  I had a bit of a struggle to get on the bike 'cos this 'ere knackered leg of mine doesn't like being lifted too high in the air.  Still, after a bit of wiggling and cussing, I managed to climb aboard and we headed back to the rally site.  The rest, as they say, is history.  I grabbed the van, hitched the trailer, recovered the B31 ( and picked up a few things from the pub that folks had left behind ) then headed for home.

OK - so for me, it wasn't a bike rally as such.  I know we are the organising club, but it still doesn't feel "right" going there by van, even if it was a necessary evil as far as carrying equipment went.  On a more positive note - everyone seemed to have a good time, with most people going on the steam train into Bridgnorth . . . and coming back worse for wear, drink-wise.  The weather was fairly decent - we did have a bit of rain, but it could have been worse.  There were awards, but as for who won what . . . .when I find out, I just might put them here . . .  .or not . . . .don't hold your breath.