This was the rally site with less than three weeks to the event - would it be dry in time ?

With all the rain we'd been having throughout February, things weren't looking very promising for our rally on March 13th.   On Sunday 1st of March a few of us took a trip over to the Unicorn to have a look at the state of the field.  OK, it was soggy - very soggy in places, so we decided to give it another week, then come and take another look and make a decision on whether to go ahead.   Come Sunday 8th we met up again - the field was much better, although a few parts were still unsuitable for camping.  One of the other victims of the flooding was the electricity - so we'd have to sort something out, power wise. . . .so I'd like to say thanks to Roger for the generator. 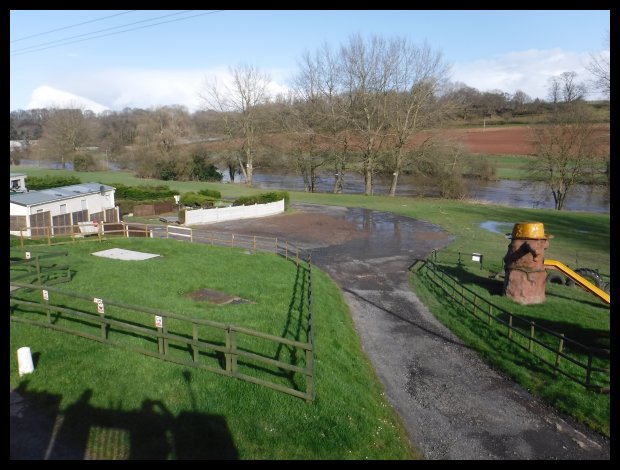 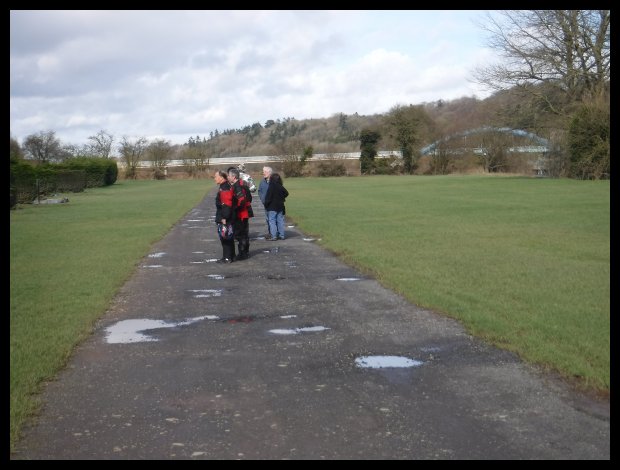 The river has gone back to where it should be and the field is draining nicely - we should be OK as long as we have no more heavy rain.

Once again putting up the control tent was a struggle - I'm sure the thing actually grows more poles every time we pack it away.  Still, after much cursing the tent resembled something like.  Luckily we had a few boards to put on the floor, knowing that once a few folks had wandered in and out the grass would have been churned to mud.   Right. let's get the kettle on.  Seeing as we had no power, it was time to use the trusty old gas boiling ring and the kettles . . . .only they seem to have disappeared since last year's rally.  Once again we were fortunate enough to have a spare gas cooker and we dug into the club funds for another kettle.  At last - we seem to have something resembling organization.

Seeing as the tent was now sorted, I jumped on my old B31 and headed down the cafe for dinner ( or late breakfast ) - yes, I know I took the bike down on the trailer, but there's no way I could carry the control tent, the gas bottle, the cooker, the lighting rig, etc.  You get the picture ?

Because the field was in a bit of a soggy state, we gave the folks who had pre-booked the option of having their money back if they didn't wish to camp.  All those who turned up chose to camp . . .and we even had folks turning up on the day and still wanting to camp. 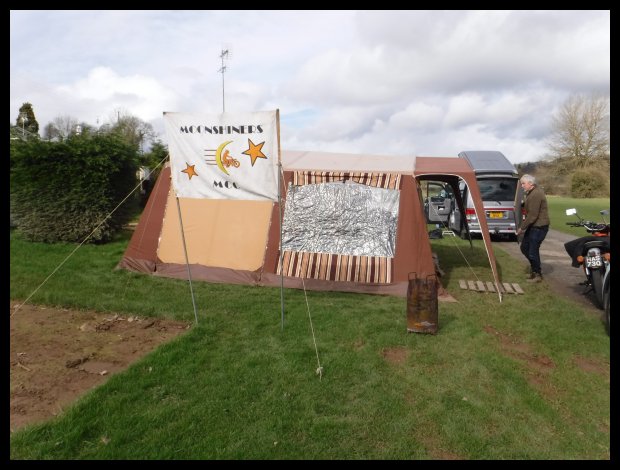 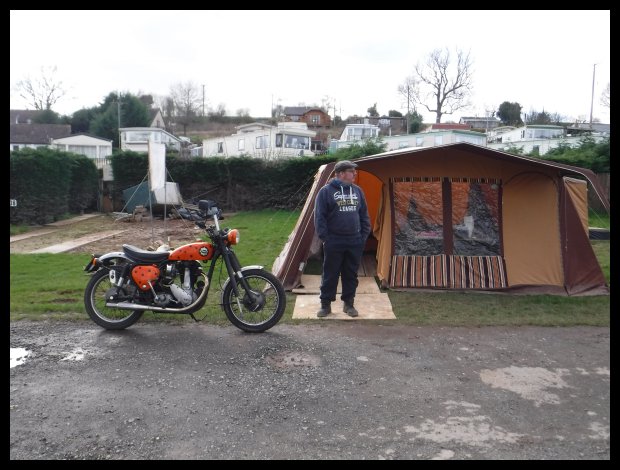 Having got the tent up - we now needed a few folks to start booking in . . . .and indeed they did. 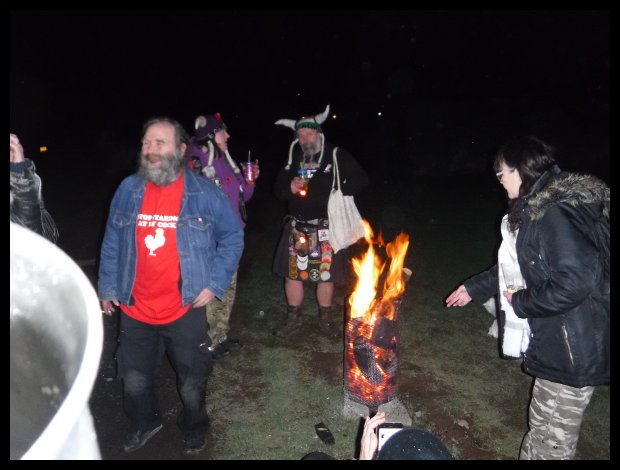 A few folks doing what we all love doing - playing fire.

Friday night and you could tell were were down in numbers, but considering the weather and the fact that a few folks had gone down South for Moz's funeral, it wasn't all that bad.   The beer was as good as ever, and I certainly enjoyed the food.

Now for me, this is where it sort of goes wrong.  I had a bit of a sore throat and a cough - and considering the news had been full of doom and gloom concerning this 'ere coronavirus - I decided the best thing to do was stay in my room until it was time to pack away on Sunday morning.  I didn't really want to go down as the bloke who infected a rally . . . .so for the folks in the pub it was a win - win situation.  They didn't get infected and I didn't musically assault them with my banjo.  Every cloud, and all that.

Sunday morning and the rain has returned.  We weren't surprised, the forecast did predict it, but even so, you'd rather they'd got it wrong.  Still, enough moaning.  So following breakfast we started packing things away.  Once again, we decided to leave the control tent on site, then return to pack it away at a later date when it had dried out.  We removed *anything* remotely thievable. Back in 2018 when we had to leave the tent on site due to the snow, we returned to find the table trestles, the brazier and even the tent pegs had been stolen - we found everything except the tent pegs outside the caravans on site.  Let's hope things remain untouched by next Sunday. 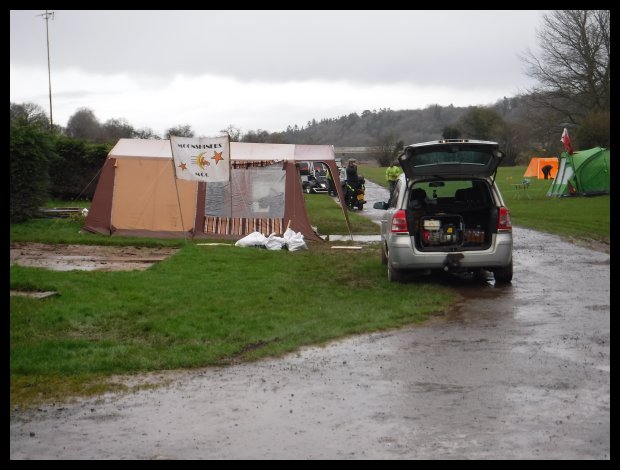 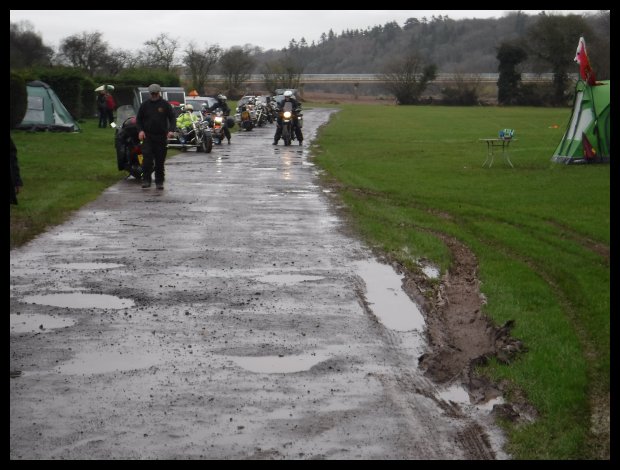 By Sunday morning the rain had returned, which made packing away both muddy and entertaining . . . if you like that sort of thing. 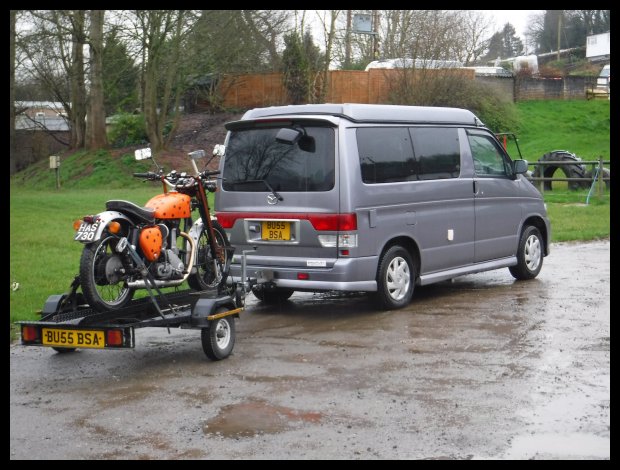 Seeing as I missed the awards on Saturday evening, Nigel kindly emailed 'em on to me - so here we go.

There we have it.  A rally that almost didn't happen, what with the weather and the health scare . . . but it did  happen . . . and it only happened because you folks are brave enough, daft enough, determined enough, and stubborn enough to venture out and have a good time no matter what.  And for that, we thank  you.