Right - for the last few years I've been going to the Grub's rally, but haven't stayed overnight.  This was mainly due to me no longer being able to get in and out of a tent, not to mention the fact that I can't get on my bike if there's anything on the seat behind me.  This year, I decided, was going to be different.  One way, or the other, I was going to spend the weekend at the rally.

That old faithful, the "Dog Kennel" was dug out from the garage and hitched to DOT.  OK, so I found it painful to maul the Dog Kennel about, but if I wanted to go to the rally, then it was worth it.  There was a bit of rain on the 22 mile trip to the rally site at Dordon, but not enough to make life unpleasant.   I booked in, then grabbed sausage and chips from the on site food wagon.  Having fed, it was time to head for the club.  The rain had now decided to become persistent and heavy - ah well, it's dry inside the club.  The rain was still falling a good few hours later when I left the club.  I grabbed a cheeseburger from the food wagon and headed back to the Dog Kennel.  For the first time in a few years I was lying there in the Dog Kennel, eating supper and listening to the shipping forecast whilst the rain unsuccessfully tried to dampen my mood. 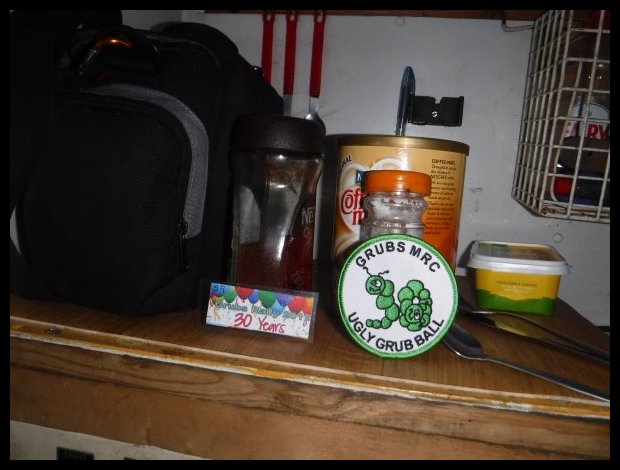 This year's badge, and rally ticket for the Grubs MRC 30th anniversary. 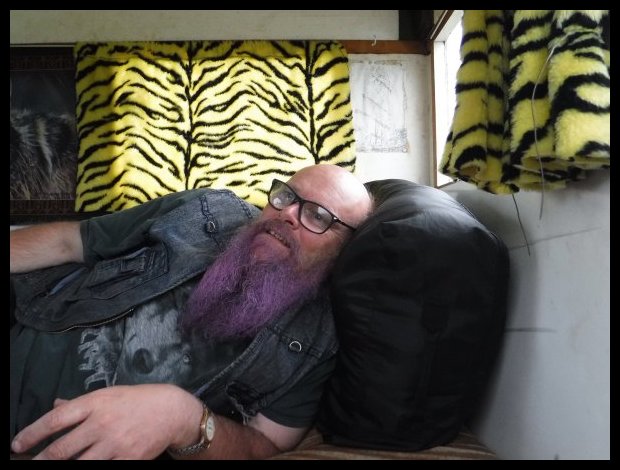 Saturday, and the rain had departed.  In its place was sunshine - which is as good a reason as any to take DOT out for a ride.  I took a scenic ride back home.  Yes, I know I'm at a rally, but I enjoy riding, and besides, there are things that I needed to do back in the garage.

By tea time I was ready to head back to the rally.  Once again, down came the rain.  I put on my waterproofs and hit the M6. There was very little traffic, and by around eight o'clock I was back on site.  Of course, I just had to visit the food wagon once again - and very  good it was too.

The band in the club was "Live and let rock".  Now I ain't an expert in these things, but they sounded good to me. It appears most folks thought the same judging by the way they were all enjoying their selves.   Halfway through the night there was a break in proceedings for the awards and raffle.  There was a special award given to three of the Grubs MRC who have been in the club since day one - all of thirty years ago.

The rest of Saturday night carried on with folks drinking, dancing and generally doing what you do on rallies.  I ended the night by once more visiting the food wagon and walking back clutching a cheeseburger - this was promptly anointed with Tabasco sauce and Worcestershire sauce, and washed down with a cuppa . . . while once again listening to the rain hitting the Dog Kennel. 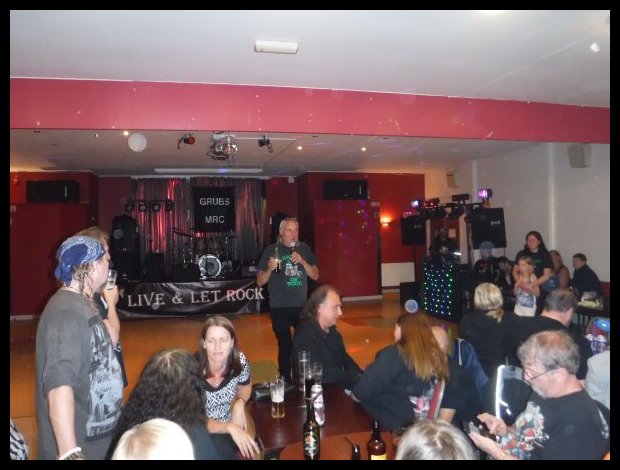 The awards get distributed.

Sunday morning, and like yesterday, the rain had gone.  My plan for today was to pack the Dog Kennel away, then leave it parked at the rally site for the day, and collect it on my way back from Founders Day at Lutterworth.  The rally site, at Dordon, is about halfway from my house to Lutterworth, so it made sense to set of from here rather than taking the Dog Kennel home first.

By the time I was ready to leave, most folks had packed up and left . . . . apart from "Toads Corner" where the members of the "Toads and Dogends"  ( who won the club turnout ) were slowly recovering from last night's shenanigans. . . . and the less said about that, the better. 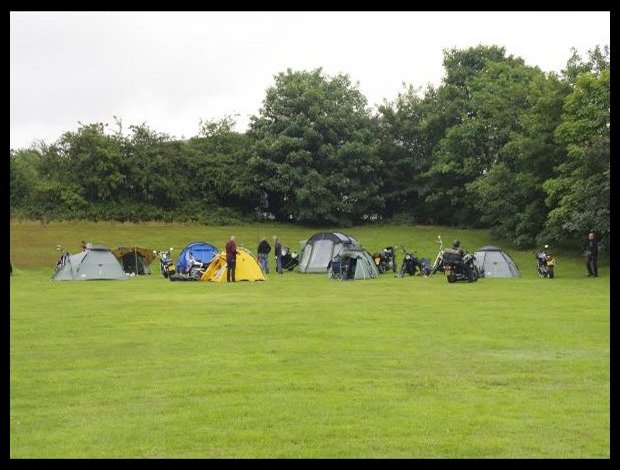 The "Toads and Dogends" camped in "Toad Corner"

The ride over to Stanford Hall was done mainly in sunshine, apart from a very short but heavy shower just before I got there.  The rest of the afternoon was spent wandering around looking at the various machines both in the bike park and in the event itself.  I had dinner there - it cost twice as much as the food at the rally, and was nowhere near as good.  Saying that, I knew that would be the case, so I can't really complain.  As per normal for me, I had a camera in my hand.  The photographs from Founders Day can be found HERE.

By late afternoon it was time to head for home.  I pulled in at the rally site, and there, all alone on the car park was the Dog Kennel.  I hitched up and took a last look at the rally site.  There was not a single bit of litter in sight - well done you Grub type people.  All that remained was the journey home.  I decided not to use the motorway, and took a ride along the A5 instead.  By early evening the Dog Kennel was back in the garage, and another weekend was done and dusted. 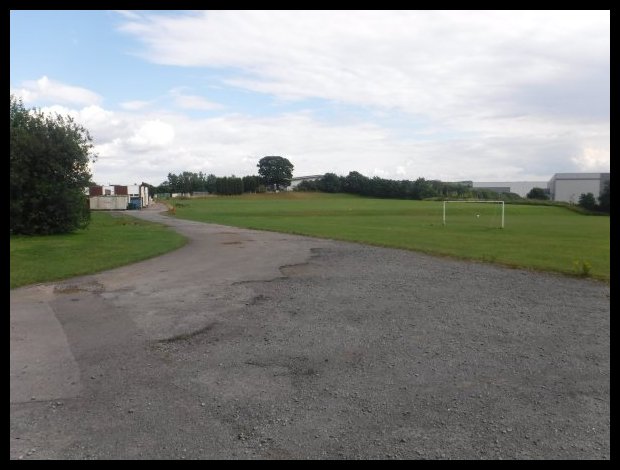 All ready for the next one - hopefully.

Well there we have it.  The first rally I've managed to stay on in a good many years. ( I don't count our own club rally as I don't camp there. )  To me, it was worth the discomfort of mauling the Dog Kennel about, and the awkwardness of getting in and out of it.  It was good to enjoy the atmosphere of a rally where most folks know each other and there's a very relaxed feeling to the weekend.

The only niggle I really had was the rain.  Not so much the riding in it, but the fact that you couldn't sit outside and talk to each other.  There was only one room available in the club, so conversation was a tad difficult, shall we say ?  Despite that, I still had a good time.  I was thinking about selling the Dog Kennel, but having used it again, I'm having second thoughts.

Thank you Grubs - here's to the next thirty years.