"Beezer and the Beast"

It is said that you don't pick the dog, the dog picks you.

In the case of Ajay, that was certainly true.  I had toured around various dogs homes and animal sanctuaries but nothing seemed to "fit".  There were dogs of all shapes and sizes, but not the right dog.  Until I happened upon an animal sanctuary in Cradley, and there, sitting quietly, as if waiting for me, was a big, black, solid looking dog.  The dog walked up to me and sat down.  I knelt down and looked along a big black nose and into a pair of brown eyes.  I had found the right dog.
Having a rather handsome A.J.S. single, I decided that "Ajay" would be a suitable name for a rather handsome dog.
The next thing was some way of carrying five and a half stone of what appeared to be an Alsatian /Doberman cross  ( I was told Alsatian / Doberman, but I reckon he was more Labrador / Doberman ) on a motorcycle.  The answer was simple.  That's what sidecars were made for.   So my trusty old M21 side valve was rigged out with a Steib sidecar.

One dog and his bike.

Seeing as Ajay used the sidecar, I registered the bike in his name.  There it was on the log book.

You can imagine the reaction I got from the police whenever they pulled me over for a spot check. ( Perhaps I should have named him "Spot" )

Of course, if bikes were involved, then Ajay wouldn't be far away. 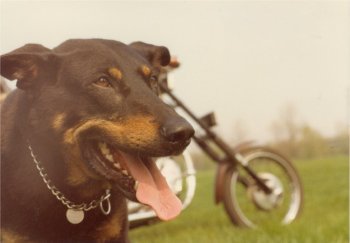 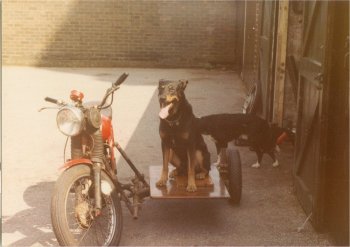 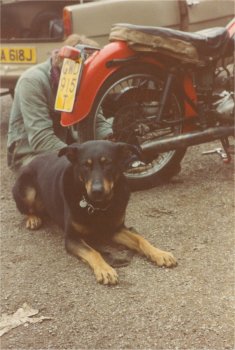 Aided and abetted by "Tiggy"

One of the little "problems" with having a dog is how will they react with other critters ?  Now there just happened to be a resident cat at home.  A cat which had never seen a dog, let alone a dog that was around ten times bigger than aforesaid cat.  This was a classic case of a problem that never was.  Both cat and dog took to each other straight away.  This worked out to the benefit of both of 'em.  Should Ajay want the front room door opened, he would "goose" Tiggy in the direction of the door, and by means of a claw hooked underneath, the door was soon open.  Should Tiggy want to get into the kitchen, then Ajay was "summoned" and his weight soon had the door open.  Great !  There ain't a room in the house that is animal proof. . . . apart from when this canine and feline double act decided to try the front door.  Now Ajay knew that by pressing a door handle down, the door would open.  The front door didn't have a handle, but it did have a nice little latch that would lock the door. . . which is how I came to be locked out of my own flat by my own dog. 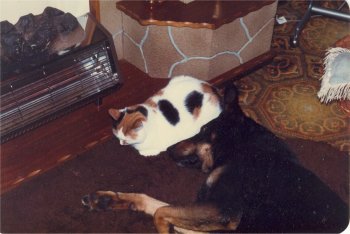 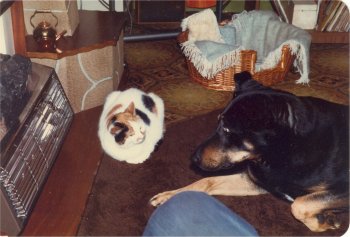 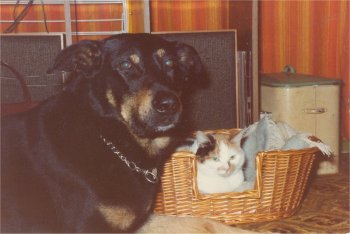 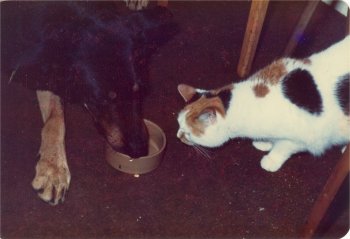 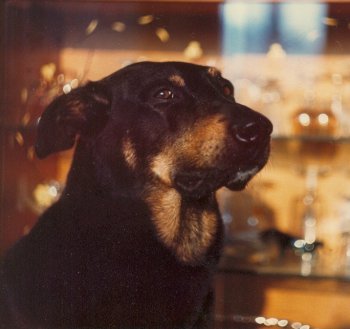 Throughout the early 1980's Ajay and myself did numerous rallies, toured most of Britain and generally enjoyed life.
To all the bike clubs that welcomed us on their rally sites I would like to say a belated thanks.
In all the thousands of miles we covered, and at all the different places we stopped I never had to worry about Ajay.  If he wasn't by my side then he would be asleep in the sidecar.

Sometimes he would even be awake in the sidecar.

Over the years I grew to love that dog more and more, so you can imagine what happened one Spring morning when I found him dead.
He left life as he came into it: - with no trouble or fuss.  Never had a day's illness, just lay down, went to sleep and forgot to wake up.
I think it was only my love of bikes, and a few true friends that helped me stay sane.
( Since when have I been sane?)
One of the lads in the club, Pete, who's still a member today, did a wonderful paint job on my trike, which was dedicated to Ajay.  Thanks Pete, it meant a lot to me.

Times change, and people change with them.  I am no longer in a position where I could give the time needed to look after a dog.  Perhaps the times will change again, and once more I will have the pleasure of a large furry head resting on my knee as I ride my combo. 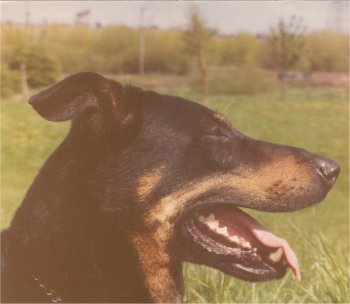 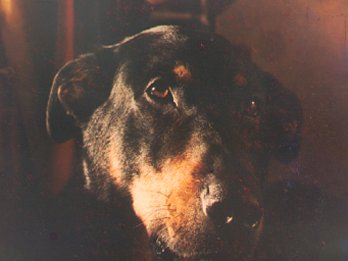 Ajay. You were more than "just a dog" to me.