"Bacon Slicer rally" - what kind of a name is that for a motorcycle rally ?

Those of us of a 'certain age' will remember the old butcher's shop, back in the days before foot and mouth and mad cow disease. 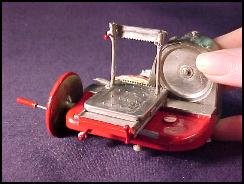 One of the main features of the butcher's shop was the bacon slicing machine.  Now this wonderful device, which was traditionally painted bright red, had a large chromed hand wheel which the butcher would turn, and out would come slices of bacon.
Non of your pre packed, injected with smoked flavoured brine stuff here, this was bacon at its best, and the bacon slicing machine was all part and parcel of the experience.
The pure mechanical simplicity of this machine was a joy to behold, the handle turned slowly, the bed plate moved back and forth whilst the cutting wheel sliced the meat into rashers of the desired thickness. . .  If only motorcycles had such appeal.  Well, certain bikes do have this appeal, and for very similar reasons too.
Imagine, if you will, a traditionally red painted machine, with a large chrome flywheel and a most un-hurried tick over.

It's no wonder that the Moto Guzzi range of single cylinder bikes came to be  affectionately know as 'Bacon Slicers'.
Now seeing as I just happen to have a 'modern' Bacon Slicer ( for 'modern' read made in 1973 ) what better excuse do I need for taking a run down towards Bath, and the 'Bacon Slicer' rally ?
So with the sun shining, and what promised to be a glorious weekend weather wise, I loaded up my own mobile bacon slicing machine - OK, so it ain't red and the flywheel's hidden behind a large cover, but it can trace it's ancestry back to the 'real' bacon slicer singles.

I took the scenic route ( this bike doesn't like motorways ) down via Cheltenham, up and over Painswick, through Dunkirk ( Eh ? what's that doing there ? ) and on to the rally site.
I was met by the sight of dozens of Guzzi singles, and quite a few twins too, come to think of it, there were even scooters, two stroke twins and a rather fetching looking utility trike.  Now being a fan of single cylinder bikes, as opposed to a 'dedicated' fan of Guzzis I'm afraid I couldn't identify each and every model, but that wasn't the point of being here.
I found a nice shady spot between two trees and put the tent up.  The next thing was a couple of nice crusty cheese rolls and a coffee.  Now seeing as I forgot my cup last time I went camping, I'd made sure it was the first thing I packed this time.  Kettle on - milk ready - cup out - now where the Hell's the coffee ?  Yep - guess what I'd forgotten this time ?  Never mind, it was only a ten mile trip down to Bath and the local supermarket - and what's ten miles when the sun's out and you've got all day ?  Having fed and watered, I ventured out amongst the bikes, and soon found out that the carburettor on mine is 'back to front' - that explains why I couldn't find the tick over screw or the mixture screw then.  Must admit, these Guzzi owners are a damn friendly bunch and will happily rabbit on for hours about the merits and pitfalls of various models - which in my book is a good thing.

A very nice outfit indeed - and it's used too, which seemed a common theme amongst the bikes on this rally. Click on the above piccy - and take a closer look - and a listen too ( if it works - you know me and computers ).

A most used bike indeed - and it looks all the better for it. 'Superalce'  - which apparently translates as "Super Moose"

A pair of 'His and Hers'   Nuovo Falcones

I spent most of the evening talking Guzzi before heading to the pub for the last pint or two.  Strangely enough the pub seemed to be full of people talking Guzzi too. . . I can see a definite theme to this weekend.
Sunday morning and I awoke with a right headache - which wasn't due to the beer before you say anything ( at £ 2-55 a pint you can see why ).  Now seeing as I had picked my spot carefully, I was able to lie in the tent for a good few hours before the sun came around and made things a tad too warm - and warm it was.  One of those days when even riding the bike didn't cool you down.
By early afternoon I felt fit enough to pack up and make a leisurely trip back home, which on a Nuovo Falcone is the only way to make the trip.  If you want speed and power, this ain't the bike for you, but having said that, the plus points far outweigh the lack of performance, and it is indeed a bike that you tend to ride for the sheer pleasure it brings - and when all's said and done, ain't that what biking's all about ?

Many thanks to the lads and lasses of the Moto Guzzi club for putting on such an enjoyable weekend - take a nose HERE for more details of their club.  For those folks who are a little intrigued about Nuovo Falcones, take a look HERE  for more information.