Right - it's been sixteen years since I last did this rally ( OK - so I did the Frozen Ballsup in 2007, but that doesn't count ) so I thought it was about time I did it again.   The rally is now held near to Sleap airfield - which is about the same distance for me as the 'old' site at Wem.

I'd fitted a temperature gauge to DOT's engine just before I set off, so it would be interesting to what difference it made when towing the Dog Kennel.   When working hard towing it read in the mid eighties - when riding normally it read in the mid seventies.

I took the 'easy' route - along the M6, then a bit of M54 - followed by a bit of A41 as far as Newport, then taking the "B" roads over toward Wem.  Oh dear - those "B" roads are in need of a bit of repair.  You don't notice bumpy roads so much when you're riding a bike, but when towing the Dog Kennel you feel every last one of 'em.   Anyway, it didn't take all that long to cover the 55 or so miles to the rally site.  I did stop to put my waterproofs on, but luckily it never *really* rained as such.

By early afternoon I had booked in and set up camp.   The next thing was food.  Now I happened to notice one of the food stalls had been at a rally I did a few weeks back, so I knew the grub was good.  I only wanted chips, so having bought 'em I walked back to the other end of the field to where I was camped and promptly put the kettle on and did me a couple of rounds of bread and butter.  Ah - the chips were only half cooked.  Now not wanting to walk all the way back to where I bought 'em from, I finished cooking 'em in my trusty old frying pan. 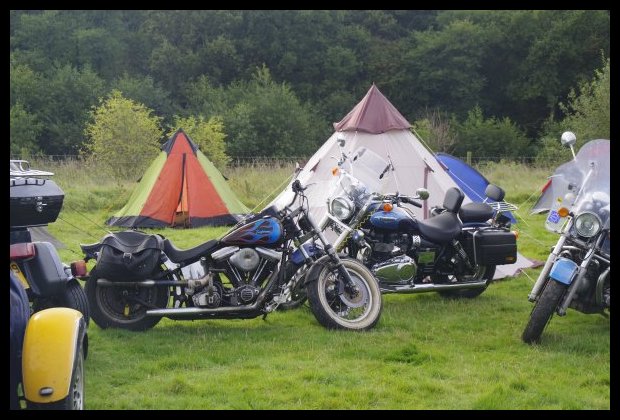 I notice these "tepee" type tents are becoming more popular these days. 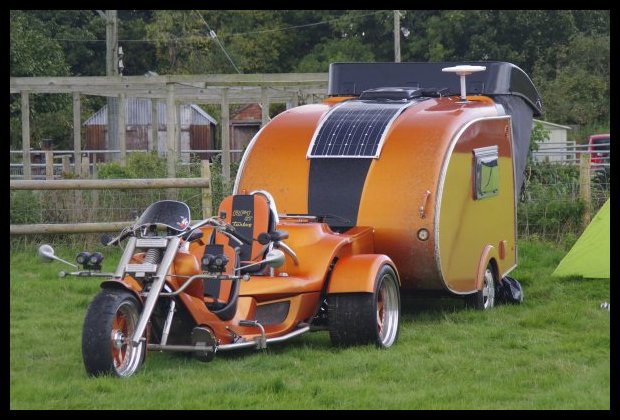 I ain't the only one who tows their home behind a trike. 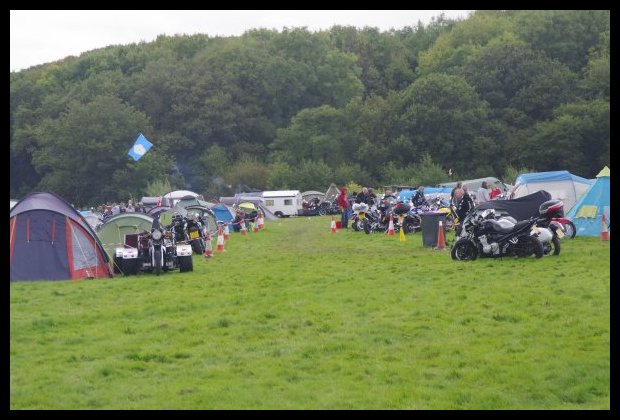 Not a bad rally site at all.

Saturday morning and I decide to take a ride out ( this turned out to be a bad move ).  The plan was to head for brekky at the Raven cafe and then see where the road took me.   The weather seemed decent, so I didn't bother with the Raven and headed toward the Ponderosa, with the intention of going to the seaside afterwards.  It was just the other side Wrexham when the rain started.  I stopped and put on my waterproofs ( again ) and carried on.  The rain got heavier and heavier - on the plus side - it wasn't cold, just bloody wet.   I spent an hour or so having dinner at the Ponderosa, then looked to see which way the clouds were coming from.  Right - I'll head in the opposite direction.  This didn't actually work as well as I'd hoped.  It seemed the rain was coming from all directions.   Making the best of a bad job I headed back to the rally site - despite the rain I'd still put over 200 miles on the clock 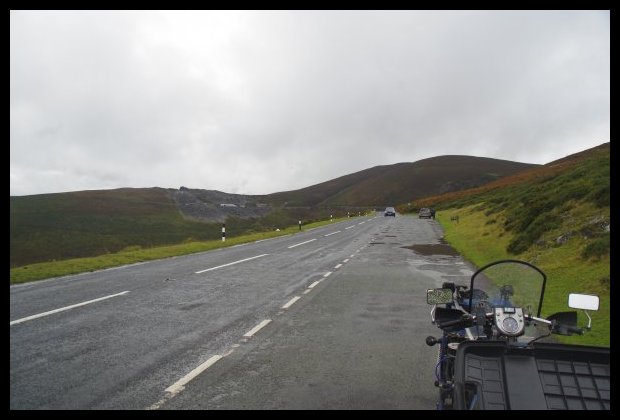 A rather wet road at the top of the Horseshoe Pass

"But what about the rally ?" I hear you say.  Well . . . .I spent most of Friday evening chatting with folks I'd not seen for a while . . . . all day Saturday was spent riding in the rain - I didn't get back on site until around eight o'clock.   So I sort of "missed" the rally - which makes this a kind of "non-rally report"   There again, I did enjoy myself, and when all's said and done, ain't that what it's all about ?