Right - although I knew where this rally was being held ( I did a camping weekend there back in April 2011 ) I wanted an excuse to test my new satnav / headset.  The Tomtom Rider satnav was happily talking to the Scala Rider QZ - it was talking with the voice of Brian Blessed, which for less than a tenner was well worth it in my opinion.

So with the sun trying its best to shine, I hitched the Dog Kennel to DOT and hit the road.  A grand total of 35 miles later, Mr. Blessed told me I had arrived.  Indeed I had, and those good folks on the booking in tent plied me with free chocolates. . . thank you.  The tea, coffee ( and the odd biscuit or two ) were also free.  Sadly the beer was not, but with a separate real ale and cider bar, the prices weren't over the top.  I stayed on the Hook Norton, a beer I quite like.

The field looked a little small, but there was an "extension" field hiding behind it.  I decided not to leave DOT on the field just in case I got blocked in - as it turned out, this was a wise move.

The rest of Friday was spent talking to folks, drinking beer, eating whatever came my way, and generally having a good time.  By the time I left the bar, storm "Brian" was making itself felt with the wind picking up - there again, we had been warned.  Every weather forecast was predicting death and destruction . . . more of that later. 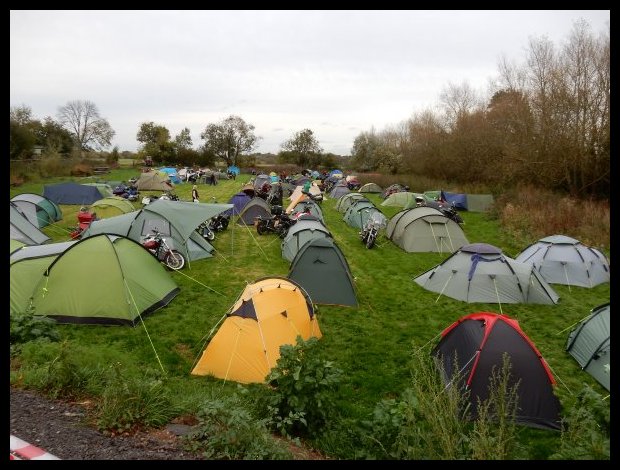 Friday afternoon, and the field is filling up nicely

In the early hours of Saturday morning storm Brian arrived.  The awning on the Dog Kennel was making a right old racket, but it never managed to escape.  I did go around the next morning and make doubly sure that all ( six of ) my pegs were staying put.  This turned out to be another wise move, 'cos during the day the wind got even stronger, in fact it didn't really die down until late evening.  My plans of going for a ride around where cancelled, instead I had a relaxing day watching the world go by.  As far as I know, no tents were blown down.  The weather forecasters may have exaggerated a little. 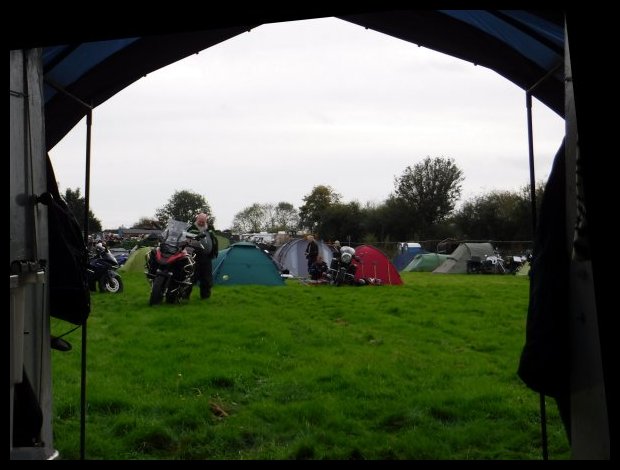 A day spent watching the world go by - or blow by in some cases.

As you can guess, the rest of the night was spent in a similar fashion to the one before - the only difference being a rather large pork roll was happily eaten.  Now that the wind had dropped, it was mild enough to sit outside - which is what I did.  That way I was only a short distance from both the food and the beer. . .  I ain't daft.

Saturday night was certainly quieter, weather-wise.  I wasn't lying there wondering what was going to blow away next.

Sunday morning and time to pack away, but first, a bacon sandwich.  No point in starting the day hungry.  Today's plan was to head home via the Three Counties Showground, near Malvern, for the classic bike / car show and autojumble.  DOT was rescued from the car park, hitched to the Dog Kennel, and before long we were heading out on the road toward Upton on Severn.

I arranged to meet up with a few folks at the show.  The one chap had entered his Yamaha YDS7 in the show - it won first prize.  I happened to notice another "DOT" there, this one was a trike too.  It was a 1948 DOT delivery tricycle with a small Villiers engine.   I have a feeling it would not cope with the Dog Kennel. 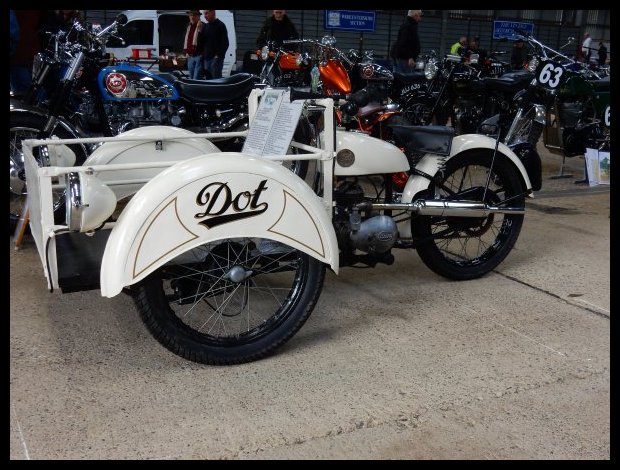 Another DOT tricycle, although a tad smaller than mine

There we have it.  Some fellow Moonshiners decided that the weather forecast should be heeded, and they stayed at home.  To be fair, I can't say that I blame them, I've done the same in the past, but I was looking forward to this rally and a bit of weather wasn't go to stop me.

Well done you Toads, a most excellent rally - a very good site - free tea and coffee - real ale and cider - and a very laid back, relaxed attitude. . . . what's there not to like ?

The photographs from the rally and the show can be found HERE.