This was the rally site with less than three weeks to the event - would it be dry in time ?

Déjà vu time  - the river was even higher this year . . . . .luckily the weather turned in our favour.

Well once again the river Severn was in flood before our rally.  This time the water level rose even higher.  On the Tuesday before the rally I popped into the pub to make sure all was well for the coming weekend - and it was.  On the downside, the steam trains would not be running, in fact no trains of any description would be running until the first week in April.  Sadly, we didn't know this when we booked the field.  This didn't really deter folks as quite a few booked taxis into Bewdley / Bridgnorth.

Right - Friday morning and a few of us met at the café to grab breakfast before heading for the rally site.  There was no point in us going early as the site had told us they would not be opening the barrier to the field until the pub opened at mid-day.  Now the one thing that had always given us grief was putting up the control tent.  This year we had a plan.  Earlier we had assembled the frame of the tent, removed any tape that had been stuck to the poles, then marked the poles, the legs, and the connecting pieces.  This paid off - we had the tent up and the kettle boiling in less that half an hour.  Of course, seeing as it was a pleasant sunny day, the booking in table was set up outside whilst we sorted the tent out.

[  I've had a request to make the photographs below link to a larger image . . . . hopefully, if you click on 'em, they should open in a new window  ] 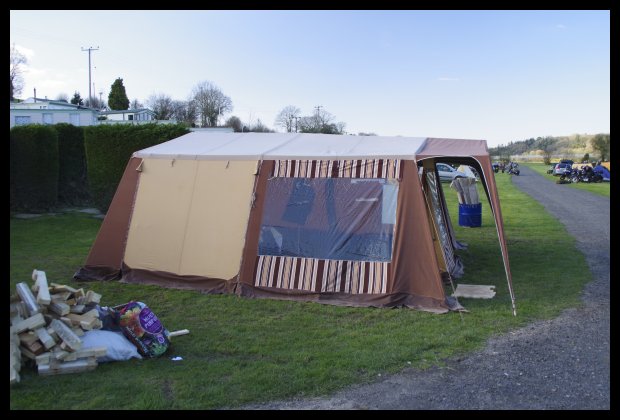 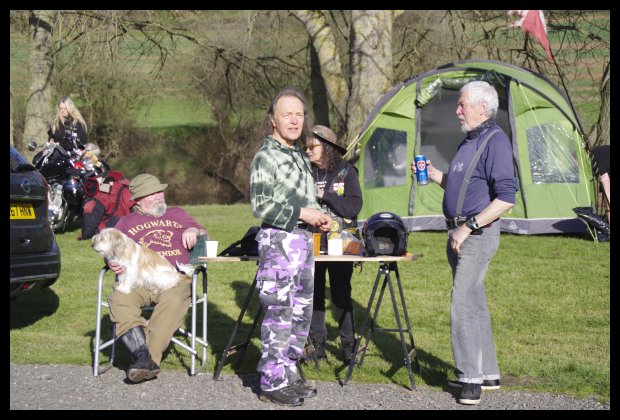 The pub was also kept busy. Once again they had "Moonshiners Chuffin' Good Ale" on tap, along with a couple of beers from The Wychwood Brewery, namely Hobgoblin Ruby and Hobgoblin Gold.   These went down very well - to well in fact.  By closing time they had run out off all beers apart from around half a barrel of Hobgoblin Gold.  Hopefully there should be a delivery first thing Saturday morning . . . and indeed there was.  A few different ales this time:  Hobsons Town Crier, Hobsons  Twisted Spire, and Sharp's Doom Bar.  I opted for the Doom bar.

Saturday was even better weather-wise, with the sun shining for most of the day.  More folks rolled up and booked in.  We kept the kettle boiling for those who wished to grab a free tea or coffee.  Having had breakfast, I took a wander around the field looking at the bikes and catching up with folks I hadn't seen for a few years.  Our rally back in 2020 was held the week before the country was on lockdown 'cos of the plague.

Folks were taking it a bit easier drinking-wise 'cos of having to ride home in the morning.  The pub was full - but despite that you could get served without too much of a wait.  I have to say the pub food was also excellent, well the meals I had were.

Just before we were about to hold the raffle draw and award presentation, Gordon had a phone call.  It turned out that one of our regular ralliests, Eric, had been involved in a rather serious accident in Much Wenlock on the way to the rally.  He'd been taken to Shrewsbury Hospital with various injuries.  ( Update - I had a phone call on Monday saying Eric would be released from hospital on Tuesday )  His wife, who had been on the back of his trike got away without serious injury. 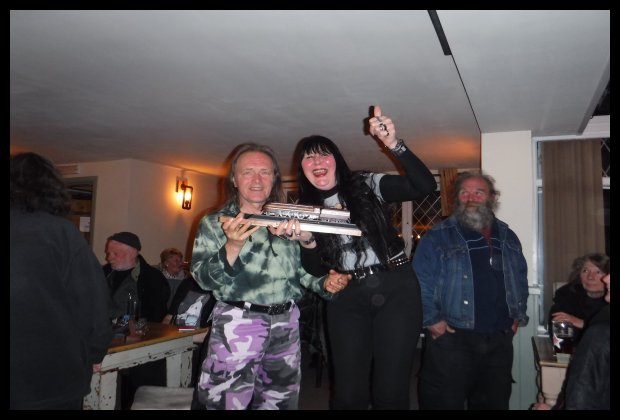 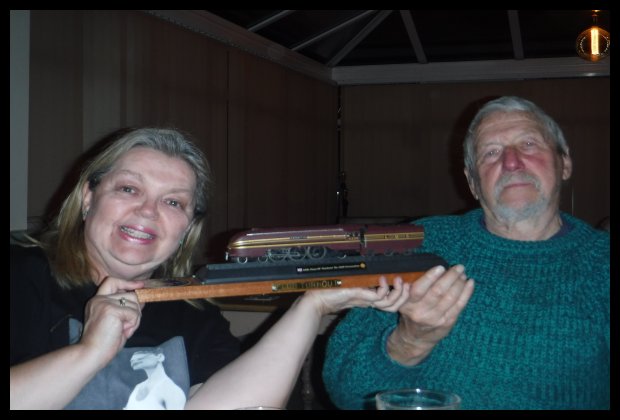 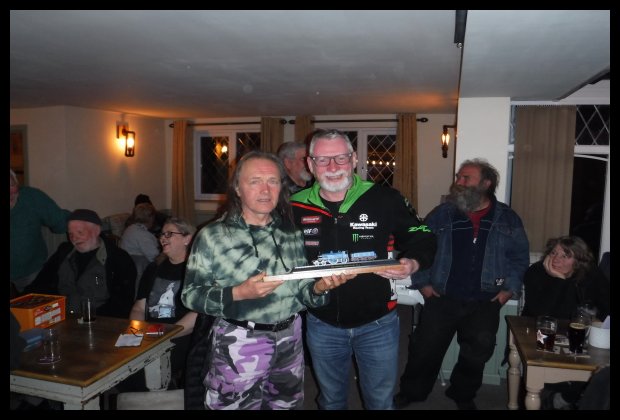 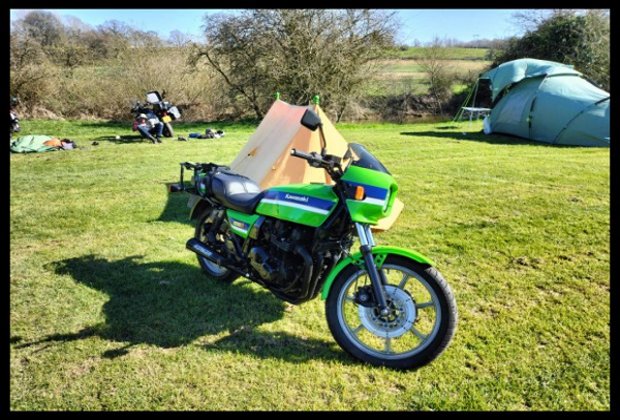 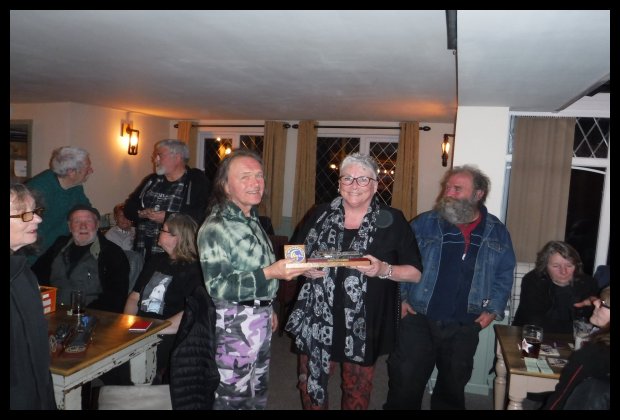 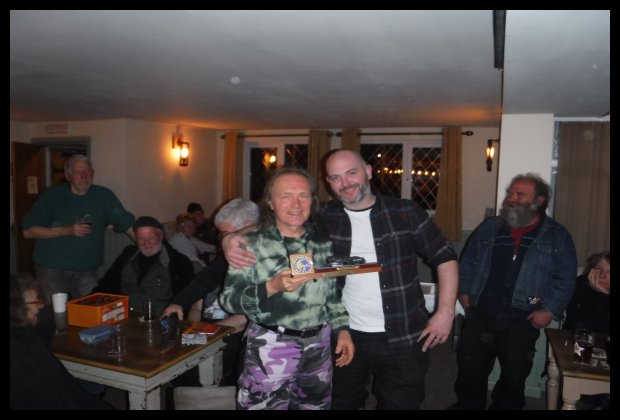 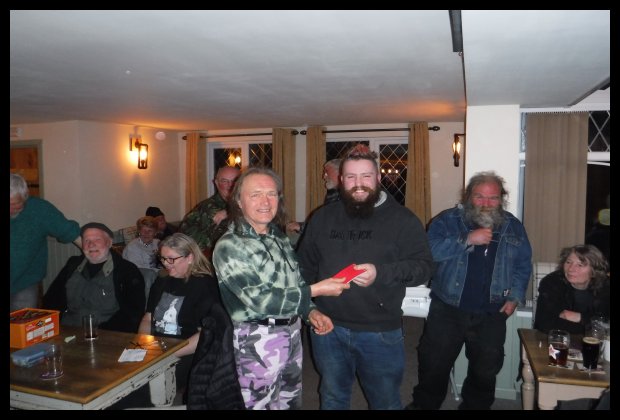 Well that just about sums it up.  It was great to be able to get out and about once again and meet up with long lost friends.  OK, so it was a pity the trains weren't running, but it didn't really stop us from having a good time.  I suppose the only real "downer", for want of a better word, was the news about Eric's accident.   I'd like to say thanks to all the folks that turned up - we had a good rally with a most relaxed attitude.  Will we be doing it again next year ? . . . .well when we went and settled up with the pub, they told us the cost will have to increase next year "because of Covid" - - - but they wouldn't tell us what the new price would be.  Anyway - enough of all that, and I'll see you all in a field sometime.